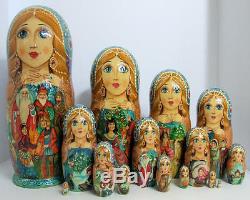 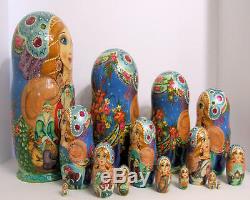 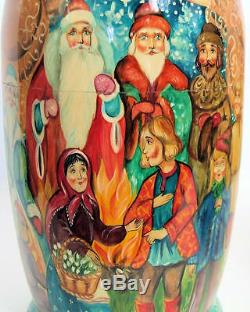 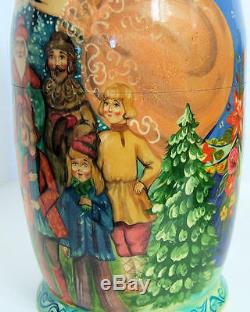 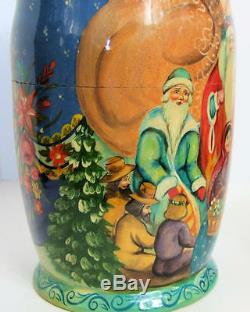 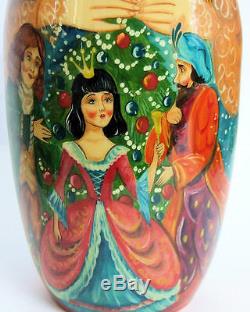 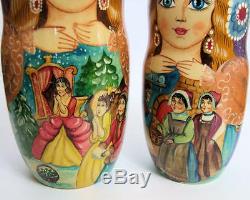 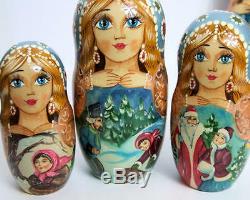 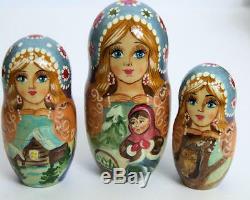 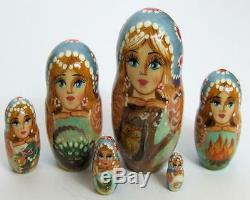 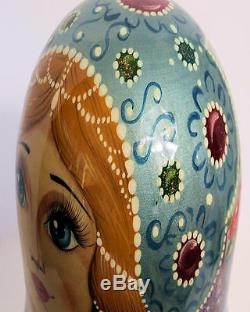 Here is a 15pcs by the artist Smirnova she portrays the fairy tale of Twelve months throughout the set. Each doll gets smaller as the set progresses down to the. Last doll of this gorgeous 15pcs set. Each doll is hand painted and on the back of the dolls their are beautiful flower arrangements. The size of the doll is 12.5 inches tall (32 cm) by 5.5 inches wide (14 cm). The set is signed on the bottom of the first doll by the artist Frolova. Once there lived an evil, greedy woman who loved her own daughter and hated her virtuous, hardworking stepdaughter. On a very cold day in January, she sent her poor stepdaughter to the forest to pick snowdrops for her stepsister's birthday. But the snowdrops won't be blooming for another two months, at least! " Her stepmother said, "I don't want to hear about it. Go out there and find them and don't come back until you do. Since the girl had no choice, she started walking through the frozen woods. She walked further and further and got colder and colder, but there wasn't a living thing to be seen. The wind began to blow and the snow began to fall. Suddenly, she came out into a clearing where she saw twelve men, from very young to very old, dressed in rich clothes. They asked her why she was out at night in the forest during a snowstorm. She bowed politely to them and told them that her stepmother had ordered her to pick snowdrops for her stepsister. The twelve months felt sorry for her, and decided to help her. January, who looked like a very old man, took his cane, hit the ground with it, and chanted a spell. Around them, that cold first month of the year passed by within seconds.

He then gave the cane to February, and the same thing happened, and then the cane went to March, who made flowers spring up all over the glade. She picked great armfuls of tender spring flowers and put them in her basket.

The girl found the glade and the twelve months around the big fire. But this daughter was rude to them and did not get anything. January waved his hand and she was buried in thick layers of snow. Her mother tried to find her, but also was frozen to death. The kindhearted stepdaughter lived long and happily. In May she had the freshest flowers in her house, in June the best berries, and in September the best apples. People said that the twelve months visited her regularly and always gave her their blessings.

The item "15pcs Hand Painted One of a KInd Russian Nesitng Doll Twelve Months by Frolova" is in sale since Friday, March 29, 2019. This item is in the category "Dolls & Bears\Dolls\By Type\Nesting".

The seller is "randlltd5z8f" and is located in Las Vegas, Nevada. This item can be shipped worldwide.
russianhandnestingbeautyuniquegirlfairylargewinterwoodenchristmaspolytaleauthor'ssignedroly10pcswoodmatryoshkababushkakindhandmadepaintedpieceartisttraditionalstackingpiecesauthenticcarvedexclusivedollrarevintagedolls