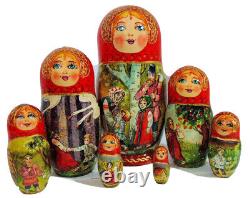 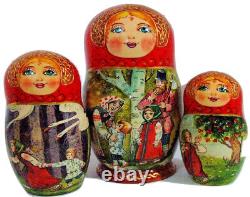 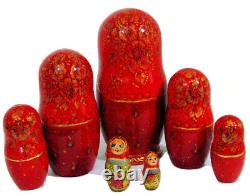 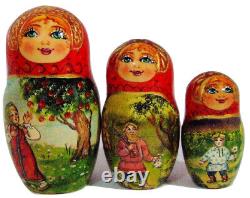 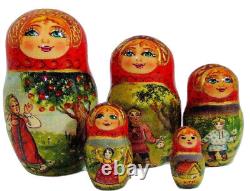 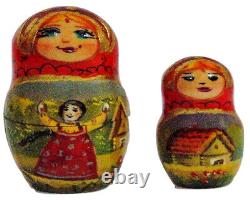 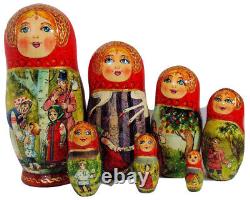 7pcs Russian Matryoshka (Nesting Doll) depicting the Fairy tale of Magic Wild Geese by the Exclusive Artist Lena Semenova. This set was painted and signed by the artist Lena Semenova on the bottom of the first doll. Hand made and Hand Painted by the artist in Sergiev Posad, Russia. The first doll is 9 inches tall (23 cm) and the width is 4 inches (10 cm) each doll gets progressively smaller as the set is opened.

Any patches in the photos are from the camera's light reflection. An old man lived with his old wife; they had a daughter and a little son. Be very careful, watch over your little brother, and do not leave the house. The parents went away and the daughter forgot what they had told her; she put her brother on the grass beneath the window, ran out into the street, and became absorbed in games.

Some magic swan geese came and seized the little boy, and carried him off on their wings. The girl came back and found her brother gone. She gasped, and rushed to look in every corner, but could not find him. She called him, wept and lamented that her father and mother would scold her severely; still her little brother did not answer.

She ran into the open field; the swan geese flashed in the distance and vanished into the dark forest. The swan geese had long had a very bad reputation; they had done a great deal of damage and had stolen many little children. The girl had guessed that they had carried off her little brother, and so she rushed after them.

She ran and ran and saw a stove. Stove, stove, tell me whither have the geese flown?

If you eat my cake of rye I will tell you. Oh, in my father's house we do not eat cakes of wheat!

The stove did not tell her. She ran farther and saw an apple tree tree. Apple tree, apple tree, whither have the geese flown? "If you eat some of my wild apples, I will tell you".

Oh, in my father's house we do not even eat sweet apples. She ran farther and farther and saw a river of milk with shores of pudding.

River of milk, and shores of pudding, whither have the geese flown? "If you eat my simple pudding with milk, I will tell you".

Oh in my father's house we do not even eat cream. She would have run in the fields and wandered in the woods for a long time, if she had not luckily to meet hedgehog. She wanted to nudge him, but she was afraid that he would prick her, when she asked. Hedgehog, hedgehog, have you not seen whither the geese have flown?

"Thither", he said and showed her. She ran and saw a little hut that stood on chicken legs and turned round and round. In the little hut lay Baba Yaga with veined snout and clay legs, and the little brother was sitting on a bench, playing with golden apples. His sister saw him, crept near him and seized him, and carried him away. But the geese flew after her: if the robbers overtook her, where would she hide?

There flowed the river of milk and the shores of pudding. Little mother river, hide me! If you eat my pudding. There was nothing to be done; she ate it and the river hid her beneath the shore, and the geese flew by. She went out and said.

"Thank you", and ran on carrying her brother; and the geese turned back and flew toward her. What could she do in this trouble? There was the apple tree. Apple tree, apple tree, little mother, hide me! If you eat my wild apple. The apple tree covered her with branches and leaves; and the geese flew by. She went out again and ran on with her brother. The geese saw her and flew after her. They now came quite close, they began to strike at her with their wings; at any moment they would tear her brother from her hands. Luckily there was the stove on her path. "Madam stove, hide me", she begged. If you eat my cake of rye. The girl quickly stuck the cake in her mouth, went into the the stove, and sat there. The geese whirred and whirred, quacked and quacked, and finally flew away without recovering their prey.

The girl ran home, and it was a good thing that she came when she did, for soon afterward her mother and father arrived. His sister saw him, crept near him and seized him, and ca. This item is in the category "Dolls & Bears\Dolls, Clothing & Accessories\Dolls & Doll Playsets". The seller is "randlltd5z8f" and is located in this country: US. This item can be shipped worldwide.