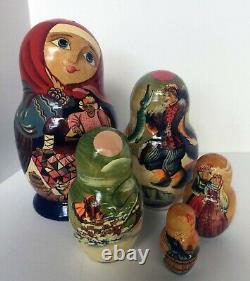 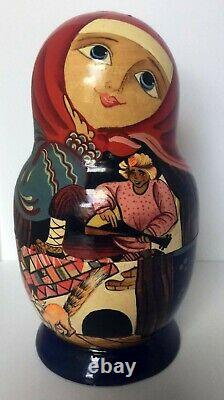 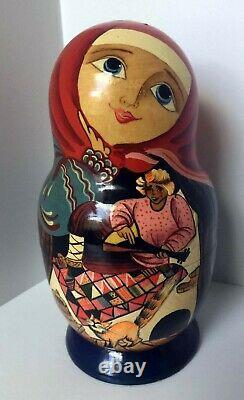 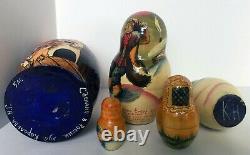 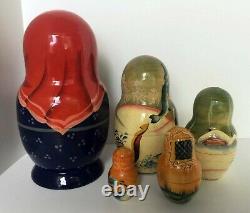 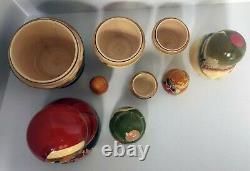 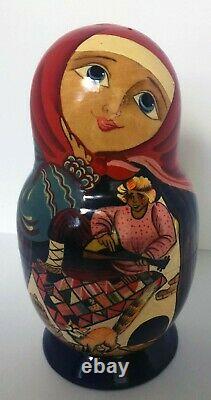 Beautiful hand painted set of Russian Matryoshka dolls or nesting dolls. This is signed by the artist: N.

Has 5 dolls all in tact and beautifully depicts the Russian Fairy tale story of Amelya and the Pike, or At the Pike's Behest. Largest doll is just under 7" tall and the smallest doll is just under 2" tall. Each piece is hand painted with wonderful detail and initialed by the artist at the bottom. Some figures have parts of the story written on them.

Very unique and fun piece. Emelya lived in a village on the shore of the Volga River with his two brothers and their wives. Although he was good-looking, he was also foolish, lazy, and despised work. He spent his days sitting on the clay stove in the kitchen. His brothers ran a trading business left to them by their dead father. The brothers left Emelya one day, to sell their wares along the river, leaving Emelya with the wives, promising to return with a kaftan, red boots, and a red hat for their brother. During the days and weeks the brothers were gone, the wives tried unsuccessfully to get Emelya to do work, until one day, they left Emelya with a choice: get water from the frozen river, or no dinner and no kaftan, red boots and red hat. At that threat, Emelya hurried on his way, and on reaching the river, he grumbled about his problems while hacking away at the thick ice. As he scooped water into the buckets, he noticed he had caught a fish: a large pike. Emelya was going to take it home for supper, but the pike pleaded with him, promising that if Emelya were to let him go, that Emelya would never need to work again, which was a tempting offer for lazy Emelya. All he would need to say, was By the Pikes command, and at my desire-(command) and his will would be done. Emelya agreed, and to his surprise, the commands worked. Emelya was not careful to conceal his new talent for work, and soon the tsar heard about it, and ordered this magician to appear before him at his palace by the Caspian Sea.

Emelya, being foolish and lazy, ordered his stove to take him to the tsar, using the Pikes command. He arrived instantly at the palace before the tsar, still lying on his stove, where he looked down on the tsar and was not acting the way a subject should towards his superior. The tsar would have ordered his head cut off, had he not wanted the secret to the boys power. However, he could not extract the secret from Emelya, so he tried to use his daughter to get the secret.

After three days of teaching each other games, the princess had learned only that Emelya was handsome, fun, and charming. She wanted to marry him. The tsar was at first angry, then decided that Emelya would perhaps give up his secret to his wife, if he became married.

So he arranged for a wedding. At first, Emelya was horrified at the idea, believing a wife to be more trouble than it was worth. He agreed, though, and the wedding feast was held soon after, at which Emelya finally got down from his stove. During the feast, Emelya had terrible table manners, which convinced the tsar to finally rid himself of the obnoxious boy.

A sleeping potion was added to Emelyas wine, he was thrown in a barrel and tossed into the sea, and his bride banished to an island in the sea opposite the palace. While floating in the waves, Emelya encountered his friend the pike, who allowed Emilyan to wish for anything his heart desired, since he had not abused his power. Emelya wished for wisdom, and when the pike pushed him to the island, Emelya fell in love with his wife. He had the hut on the island transformed into a beautiful palace, with a crystal bridge connecting to the mainland, so that his wife could visit her father, the tsar. With his new-found wisdom, he made amends with everyone, and thereafter lived happily and ruled well. The item "Emelya & The Pike Matryoshka Nesting Dolls Hand Painted Signed N.

Korolyova" is in sale since Thursday, August 29, 2019. This item is in the category "Collectibles\Cultures & Ethnicities\Russian".

The seller is "hilarhaa_0" and is located in Fort Lauderdale, Florida. This item can be shipped worldwide.