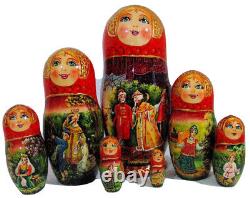 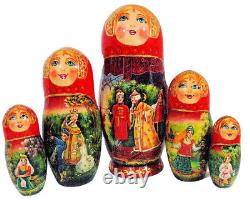 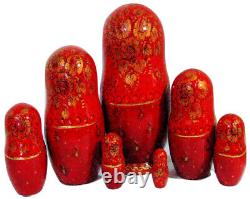 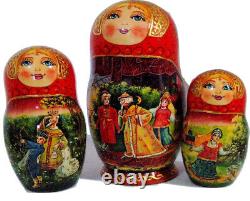 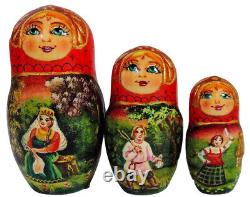 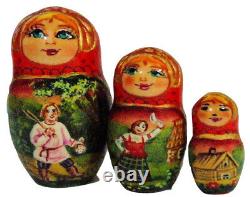 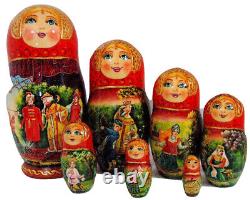 The first doll is 9 inches tall (23 cm) and the width is 4 inches (10 cm) each doll gets progressively smaller as the set is opened. Any patches in the photos are from the camera's light reflection. The Tale of Tsar Saltan.

The third said that she would give the tsar an heir, handsome and brave beyond compare. It so happened that the tsar, who was just outside the fence, overheard the conversation. When he heard the words of the last maiden, he fell in love and asked her to be his wife.

They were married that very same night and conceived a son soon after. The other sisters were given jobs as a cook and a weaver. A few months later the tsar went to war and had to part with his beloved wife.

While he was at war his wife, the queen, gave birth to his son. A rider was sent to the tsar to convey the good news. However, the two sisters and a friend named Barbarika were so jealous of their sister's luck that they kidnapped the rider and replaced him with their own messenger who carried a note to the tsar which read: your wife, the queen, has borne neither a son nor daughter, neither a mouse nor a frog, but had given birth to an unknown little creature. When he read this message, the tsar was mortified and sent a letter back telling his wife to wait for his return before taking any action.

The scheming sisters met the rider on the way back, got him drunk, and replaced the tsar's actual letter with a fake one that ordered the queen and her baby to be put into a barrel and thrown into the sea. Of course, there was no way to disobey an order from the tsar, so the palace guards put the queen and her son into the barrel and rolled it into the water. As the queen wept inside the barrel, her son grew stronger, not by the day, but by the minute.

He begged the waves to wash them onto dry land. The waves obeyed and he and his mother found themselves washed ashore on a deserted island. By now they were quite hungry, so the son made himself a bow and arrow, using small branches from a tree, and went hunting. Near the sea, he heard a screech and saw a poor swan struggling against a huge black hawk.

Just as the hawk was about to bury its beak in the swan's neck, the youth shot an arrow, killing the hawk and spilling the bird's blood into the sea. The white swan swam up to the lad, thanked him and said, you didn't kill a hawk at all, but a wicked wizard. For saving my life, I will serve you forever. The next morning they awoke and saw a wondrous city standing before them where there had been nothing before! The two marveled at the golden domes of the monasteries and churches behind the city's white walls.

My, look at all the swan has done! The two walked into the city and throngs of people greeted them and crowned the young man a prince, proclaiming him Prince Gvidon. Prince Gvidon welcomed them and offered them food and drink. He asked what they had for sale and where they were going.

"Our trade is in furs", they said, and we are headed past the island of Buyan to the kingdom of Tsar Saltan. Gvidon asked the merchant sailors to convey his respects to the tsar, even though his mother had earlier told him about the note that led to their expulsion from the tsar's kingdom.

Still, Prince Gvidon thought the best of people and could never quite believe that his father could do such a thing. As the merchant sailors were preparing to leave the island, the prince became sad when thinking about his father. Why are you so gloomy, the swan said. "I so wish to see my father, the tsar", Gvidon replied. The sailors told the tsar about the island and the walled city, and spoke of the hospitable Prince Gvidon. The tsar did not know that this Prince Gvidon was his son, but expressed a wish to see this beautiful city anyway. The two sisters and the old Barbarika did not want to let him go, however, and acted as if there were nothing to marvel at in the sailors' tale. "What is really amazing, " they said, is a squirrel that sits under a fir tree, cracking golden nuts containing kernels of pure emerald, and singing a song.

That's something which is truly extraordinary! Hearing this, the gnat, really Prince Gvidon, got angry and stung the old woman's right eye.

After he flew back to the island, Gvidon told the swan the story he heard about the remarkable squirrel. Then the prince walked into his courtyard and, lo and behold, there was the singing squirrel, sitting under a fir tree, cracking golden nuts! The prince rejoiced at this and ordered that a crystal house be built for the little animal. He placed a guard there to stand watch and ordered a scribe to record every shell. Profit for the prince, honor for the squirrel!

After the vessel arrived in the kingdom, the sailors told Tsar Saltan about the wondrous squirrel they had seen. Saltan again wanted to visit this fabled city but was talked out of it when the two sisters and Barbarika ridiculed the sailors' story and spoke themselves of a greater wonder--of thirty-three handsome young knights, led by old Chernomor, rising from out of the raging sea. The fly, Gvidon, became quite angry with the women and stung Barbarika's left eye before flying back to the island. Once home again, he told the swan about old Chernomor and the thirty-three knights, and lamented that he had never seen such a wonder. "These knights are from the great waters that I know, " the swan said.

Don't be sad, for these knights are my brothers and they will come to you. Later, the prince went back and climbed a tower of his palace and gazed at the sea. Suddenly, a giant wave rose high and deep onto the shore, and when it receded, thirty-three knights in armor, led by old Chernomor, emerged, ready to serve Prince Gvidon. They promised that they would come out of the sea each day to protect the city. In his customary fashion, the prince again made the sailors feel welcome and told them to send his respects to the tsar.

As the sailors prepared themselves for their journey, the prince told the swan that he still couldn't get his father out of his mind and wished to see him again. This time the swan turned the prince into a bumblebee. The tsar marveled at this and wanted to see this extraordinary land, but once again was talked out of it by the two sisters and old Barbarika.

They belittled the sailors' tale and said that what was really amazing was that beyond the seas lived a princess so stunning that you couldn't take your eyes off of her. The light of day pales against her beauty, the darkness of night is lit up by it. When she speaks it is like the murmur of a tranquil brook.

Now that's a marvel! Gvidon, the bumblebee, got angry at the women once more and stung Barbarika on her nose. They tried to catch him, but to no avail. He was safely on his journey back home.

After his arrival there, Gvidon strolled out to the seashore until he was met by the white swan. Why so gloomy this time? Gvidon said that he was sad because he did not have a wife. He related the tale he had heard of the beautiful princess whose beauty lit up the darkness, whose words flowed like a murmuring brook. The swan was silent for awhile, then said that there was such a princess.

"But a wife, " the swan continued, is no glove that one can simply cast from one's hand. Gvidon said he understood but that he was prepared to walk the rest of his life and to all corners of the world to search for the wondrous princess.

The woman that you desire. Is now yours to spy. With this, she flapped her wings and turned into the beautiful woman that the prince had heard about.

The two passionately embraced and kissed, and Gvidon took her to meet his mother. The prince and the beautiful maiden were married that very same evening. As usual, Prince Gvidon welcomed the sailors and, as they were leaving, he asked the sailors to send his greetings to the tsar and to extend an invitation to him to visit.

Being happy with his new bride, Gvidon decided not to leave the island this time. This time the tsar would not listen to the snide remarks of the sisters and Barbarika. He called his fleet and set sail for the island immediately. When he reached the island, Prince Gvidon was there to meet the tsar. Saying nothing, Gvidon led him, along with his two sisters-in-law and Barbarika, to the palace.

Along the way, the tsar saw everything that he had heard so much about. There at the gates were the thirty-three knights and old Chernomor standing guard.

There in the courtyard was the remarkable squirrel, singing a song and gnawing on a golden nut. There in the garden was the beautiful princess, Gvidon's wife. And then the tsar saw something unexpected: there standing next to the princess was Gvidon's mother, the tsar's long-lost wife.

The tsar recognized her immediately. With tears streaming down his cheeks, he rushed to embrace her, and years of heartache were now forgotten.

He then realized that Prince Gvidon was his son, and the two threw their arms around each other as well. A merry feast was held. The two sisters and Barbarika hid in shame, but eventually they were found. They burst into tears, confessing everything.

But the tsar was so happy that he let them all go. The tsar and the queen and Prince Gvidon and the princess lived the rest of their days in happiness. This item is in the category "Dolls & Bears\Dolls, Clothing & Accessories\Dolls & Doll Playsets".

The seller is "randlltd5z8f" and is located in this country: US. This item can be shipped worldwide.