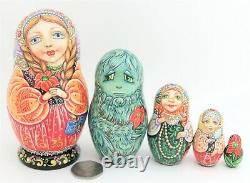 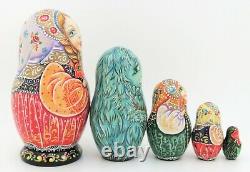 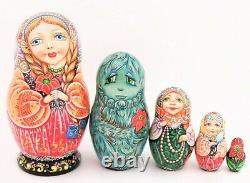 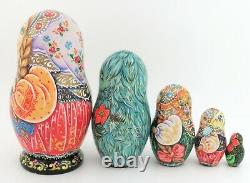 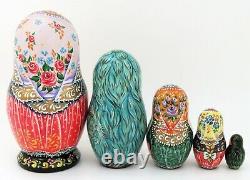 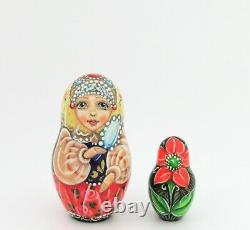 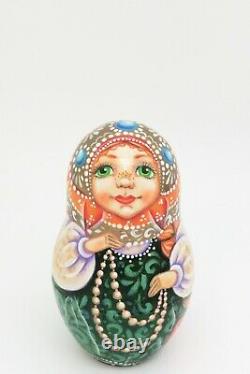 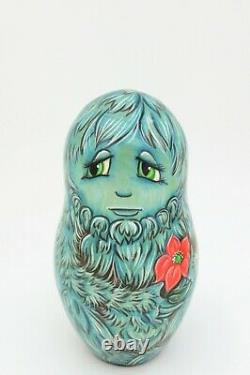 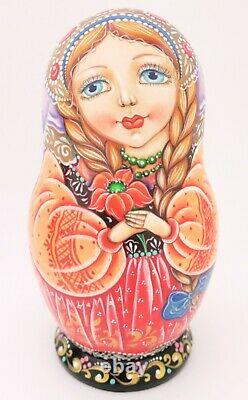 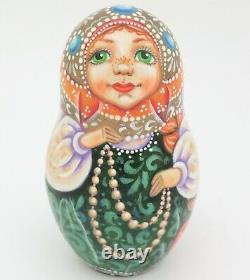 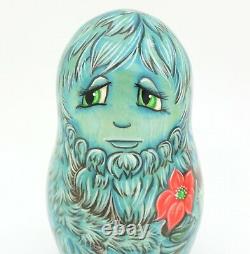 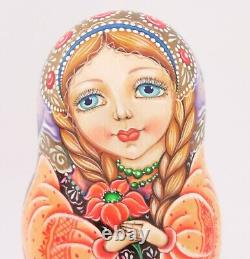 Wooden set of 5 nesting dolls created by the Russian Artist. Height of the biggest doll is 14.3 cm (5 5/8 inches).

Before going on an overseas journey, a merchant father asks his three daughters what they would like him to bring back for them. The eldest asks for a shining tiara, the middle asks for a frame through which her face would always appear young, and the youngest (Nastenka) asks her father to bring her a beautiful scarlet flower like one which she saw in her dreams. Her elder sisters laugh at this simple wish. The father's trip is successful and he finds everything that he came for, with the exception of Nastenka's scarlet flower.

A storm strikes and the father is washed overboard. He wakes up on a strange island which is full of all sorts of wonders. He explores, and eventually finds a flower just like the one Nastenka described. The instant that he plucks it, however, a great storm comes upon him and the owner of the island - a hideous monster - makes his presence known.

He tells the father that he will let him keep the flower, but in return he must send one of his daughters to live with him. Back home, the father prepares to put on the ring and meet his fate. However, Nastenka overhears a conversation where he reveals this to his friend and secretly puts on the ring herself.

There, she expects to be killed but instead finds herself on a beautiful island and welcomed for by a kind, unseen host. She accidentally catches a glimpse of him eventually, and is mortally scared at first. He allows her to go home to visit her family, but tells her that she must come back by putting on the ring by 8pm or he will die of loneliness.

Nastenka comes home dressed in splendid clothes and with presents for her sisters. Her sisters, however, become jealous and secretly turn all of the clocks in the house back two hours. Nastenka looks outside and hears the clock chiming 9pm, and quickly goes back, only to find the monster near death. She is very saddened and vows to never leave him again, and with those words the scarlet flower which she holds reattaches itself to its original stem and the island fills with light again.

The monster turns into a handsome prince and explains that he was under the spell of a witch from which he could only be freed from if he won over the heart of a lady while being in the body of a hideous monster. All my dolls fit inside one another!! Please leave feedback once you have received the item so that I know it has arrived safely. I will leave feedback in return.

Powered by SixBit's eCommerce Solution. The item "Fairy tale Scarlet Flower Russian BEAUTY & The BEAST 5 nesting dolls POKROVSKAY" is in sale since Sunday, May 23, 2021. This item is in the category "Dolls & Bears\Dolls, Clothing & Accessories\Russian Dolls". The seller is "tom3burma" and is located in norwich, Norfolk. This item can be shipped worldwide.