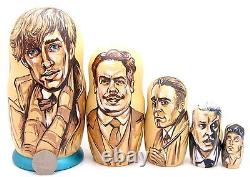 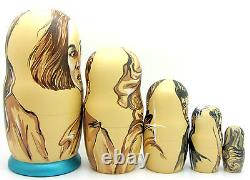 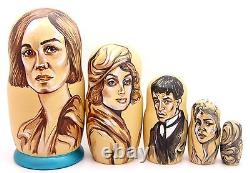 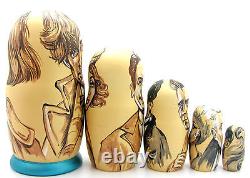 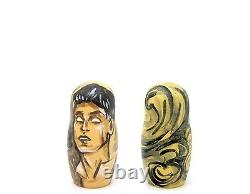 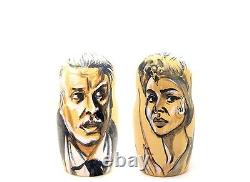 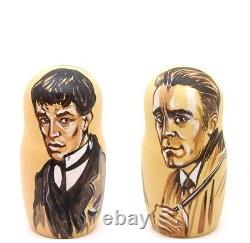 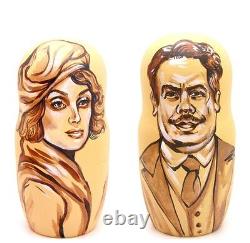 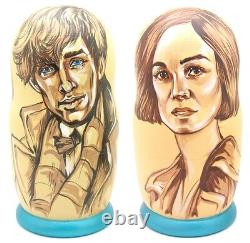 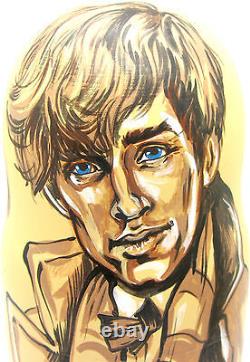 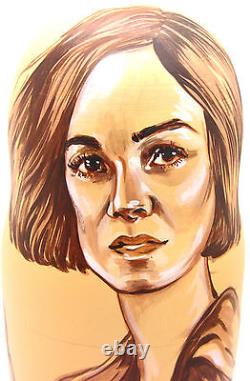 This is a beautiful and unique set of 5. Nesting dolls painted and signed by The Russian Artist Maria ROZE. Hight of the biggest doll is 17.8 cm or 7 inches!!! All my dolls fit inside one another!!

Eddie Redmayne as Newt Scamander : an eccentric, introverted wizard, magizoologist and an employee at the Ministry of Magic. Scamander is the future author of the Hogwarts School of Witchcraft and Wizardry standard textbook Fantastic Beasts and Where to Find Them.

Dan Fogler as Jacob Kowalski : a genial No-Maj cannery worker and aspiring baker who is accidentally exposed to the New York City magical community after meeting Newt. Katherine Waterston as Porpentina "Tina" Goldstein : a grounded, down-to-earth witch and a former Auror employed by the Magical Congress of the United States of America (MACUSA). She longs to fight for what is right, but was demoted to a position well below her skill level. Alison Sudol as Queenie Goldstein : Tina's younger sister and roommate, described as a bombshell, free-spirited, and big-hearted, and is accomplished in Legilimency. Colin Farrell as Percival Graves : a high-ranking Auror and Director of Magical Security for MACUSA. He is charged with the protection of wizards. Johnny Depp as Gellert Grindelwald : one of the most dangerous dark wizards of all time. Ezra Miller as Credence Barebone : Mary Lou's troubled adopted son. Carmen Ejogo as Seraphina Picquery : the President of MACUSA. Fantastic Beasts and Where to Find Them is a 2016 fantasy film directed by David Yates and distributed by Warner Bros. A spin-off of the Harry Potter film series, it was produced and written by J. Rowling, in her screenwriting debut, and inspired by her book of the same name. The film Stars Eddie Redmayne as Newt Scamander with Katherine Waterston, Dan Fogler, Alison Sudol, Ezra Miller, Samantha Morton, Jon Voight, Carmen Ejogo, Ron Perlman and Colin Farrell in supporting roles. It is the first instalment in the Fantastic Beasts series, and the ninth overall in J. Rowling's Wizarding World, which is the franchise that began with the Harry Potter films.

Principal photography began at Warner Bros. Studios, Leavesden, England on 17 August 2015. Fantastic Beasts and Where to Find Them premiered in New York City on 10 November 2016 and was released worldwide on 18 November 2016 in 3D, IMAX 4K Laser and other large format cinemas. The film has been nominated for five BAFTAs, including one for Outstanding British Film, and two Oscars at the 89th Academy Awards, including Best Production Design and Best Costume Design.

He encounters Mary Lou Barebone, a non-magical woman ("No-Maj" or "Muggle") who heads the New Salem Philanthropic Society, which claims that witches and wizards are real and dangerous. As Newt listens to her speak, a Niffler escapes from his magically expanded suitcase, which houses multiple magical creatures. As he attempts to capture it, he meets No-Maj cannery worker and aspiring baker Jacob Kowalski, and they accidentally swap suitcases.

Demoted Auror (a hunter of dark wizards) Tina Goldstein arrests Newt for being an unregistered wizard and takes him to the Magical Congress of the United States of America (MACUSA) headquarters, hoping to regain her former position. However, as Jacob's suitcase contains only baked goods, Newt is released. At Jacob's tenement apartment, several creatures escape from Newt's suitcase.

After Tina and Newt find Jacob and the suitcase, Tina takes them to her apartment and introduces them to Queenie, her Legilimens sister. Queenie and Jacob are mutually attracted, though American witches and wizards are forbidden to marry or even socially interact with No-Majs.

Newt takes Jacob inside his magically expanded suitcase, where Jacob encounters a contained Obscurus, a dark, destructive parasite that develops inside magically gifted children if they suppress their magical abilities. Newt extracted it from a young girl who has died, those afflicted rarely living past the age of ten.

Newt persuades Jacob to help search for the missing creatures. After re-capturing two of the three escaped beasts, they re-enter the suitcase, which Tina takes to MACUSA. Officials arrest them, believing one of Newt's beasts is responsible for killing Senator Henry Shaw Jr. They decide to destroy Newt's suitcase and erase Jacob's recent memories. Director of Magical Security Percival Graves accuses Newt of conspiring with the infamous dark wizard Gellert Grindelwald. Newt and Tina are sentenced to immediate death, but Queenie and Jacob rescue them; thanks to the help of Goblin gangster Gnarlack, Tina's old informant, the foursome then find and re-capture the last of the creatures. Meanwhile, Percival Graves approaches Credence Barebone, Mary Lou's adopted son, and offers to free him from his abusive mother. Graves believes it has caused the mysterious destructive incidents around the city. Credence finds a wand under his adopted-sister, Modesty's, bed.

Mary Lou assumes it is Credence's wand, but Modesty claims it is hers. When she is about to be punished, the Obscurus is unleashed, killing everyone except Modesty and Credence. Graves arrives and dismisses Credence as being a Squib (a non-magical person of wizard ancestry), and refuses to teach him magic. Credence reveals he is the Obscurus' host, having lived longer than any other host due to the intensity of his magic.

In a rage, he unleashes the Obscurus upon the city. Newt finds Credence hiding in a subway tunnel, but he is attacked by Graves. Tina, who knows Credence, arrives and attempts to calm him, while Graves tries to convince Credence to listen to him.

As Credence begins to settle into human form, Picquery and Aurors arrive. Picquery decides Credence must be executed to protect their magical society. The Aurors apparently disintegrate him, but a tiny Obscurus fragment escapes. Graves admits to unleashing the Obscurus to expose the magical community to the No-Majs, and angrily claims that MACUSA protects the No-Majs more than themselves.

After being subdued by one of Newt's beasts, he is revealed as Grindelwald in disguise and taken into custody by MACUSA Aurors. MACUSA fears their secret world has been exposed, but Newt releases his Thunderbird to disperse a poultice as rainfall over the city that erases all New Yorkers' recent memories as MACUSA wizards repair the destruction. Queenie kisses Jacob goodbye as the rain erases his memories. Newt departs for Europe, but promises to return and visit Tina when his book is finished; he also anonymously leaves Jacob a case of silver Occamy eggshells to fund his bakery. His breads and pastries are unknowingly inspired by Newt's creatures, and Queenie visits him in his shop. We speak French, English, German and Russian. Please leave feedback once you have received the item so that I know it has arrived safely.

This item is in the category "Dolls & Bears\Dolls, Clothing & Accessories\Dolls & Doll Playsets". The seller is "tom3burma" and is located in this country: GB.