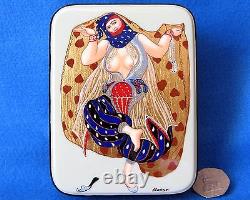 This is a beautiful and unique Russian papier mache trinket/jewellery box portraying a lovely Ballet Dancers, hand painted. The box measures 13.2 cm (5 3/16) long, 10.1 cm (4 inches) wide, 1.7 cm deep. The box is signed with the Artists name Zemina at the back and Bakst in the front. This is a fabulous oil painted picture and the photo dosen't do it justice. Costume sketch for the ballet "Schekherazade".

(May 10, 1866 - December 28, 1924) was a Russian painter and scene- and costume designer. He was a member of the Sergei Diaghilev circle and the Ballets Russes, for which he designed exotic, richly coloured sets and costumes.

Born as Lev (Leib) Samoilovich Rosenberg. , he was also known as Leon (Lev) Nikolayevich Bakst. Leon was born in Grodno (currently Belarus) in a middle-class Jewish family. After graduating from gymnasium, he studied at the St.

Petersburg Academy of Arts as a noncredit student, working part-time as a book illustrator. At the time of his first exhibition (1889) he took the surname of "Bakst, " based on his mother's maiden name.

The surname "Rosenberg" was thought to be too Jewish and not good for business. At the beginning of the 1890s he exhibited his works with the Society of Watercolourists. From 1893 to 1897 he lived in Paris, where he studied at the Académie Julian while still visiting Saint Petersburg often. After the mid-1890s he became a member of the circle of writers and artists formed by Sergei Diaghilev and Alexandre Benois, which later became the Mir Iskusstva art movement. In 1899, he co-founded with Sergei Diaghilev the influential periodical Mir Iskusstva, meaning World of Art.

His graphics for this publication brought him fame. He continued easel painting as well producing portraits of Filipp Malyavin (1899), Vasily Rozanov (1901), Andrei Bely (1905), Zinaida Gippius (1906). He also worked as an art teacher for the children of Grand Duke Vladimir Alexandrovich of Russia. In 1902, he took a commission from Tsar Nicholas II to paint Meeting of Russian sailors in Paris. In 1898, he showed his works in the Diaghilev-organized First exhibition of Russian and Finnish Artists; in World of Art exhibitions, as well as the Munich Secession, exhibitions of the Union of Russian Artists, etc. During the Russian Revolution of 1905, Bakst worked for the magazines, Zhupel, Adskaja Pochta, and Satyricon, then for an art magazine called Apollon.

Beginning in 1909, Bakst worked mostly as a stage-designer, designing sets for Greek tragedies, and, in 1908, he made a name for himself as a scene-painter for Diaghilev with the Ballets Russes. He produced scenery for Cleopatra (1909), Scheherazade (1910), Carnaval (1910), Narcisse (1911), Le Spectre de la Rose (1911), and Daphnis et Chloé (1912). During this time, he lived in western Europe because, as a Jew, he did not have the right to live permanently outside the Pale of Settlement. Having met in Paris in 1914, when Mrs.

Garrett was accompanying her diplomat husband in Europe, Bakst soon depended upon his then new American friend as both a confidante and agent. Alice Garrett became Bakst's representative in the United States upon her return home in 1920, organizing two exhibitions of the artist's work at New York's Knoedler Gallery, as well as subsequent traveling shows. When in Baltimore, Bakst re-designed the dining room of Evergreen into a shocking acidic yellow and'Chinese' red confection.

The artist subsequently went on to transform the house's small c. 1885 gymnasium into a colorfully Modernist private theatre, which is currently believed to be the only extant private theatre designed by Bakst.

Bakst died in 1924 in Paris from lung problems. In late 2010, the Victoria and Albert Museum in London presented an exhibit of Bakst's costumes and prints. The boxes most widely sought after come from one of four small Russian villages - Palekh, Fedoskino, Kholui, and Mstera.

Special schools have been established at these places where artists train for four years before they become members of each village's art community. Each village also has its unique style. Alice Garrett became Bakst's representative in the United States upon her return home in 1920, organizing two exhibitions of the artist's work at New York's Knoedler Gallery. This item is in the category "Dolls & Bears\Dolls, Clothing & Accessories\Dolls & Doll Playsets". The seller is "tom3burma" and is located in this country: GB. This item can be shipped worldwide.