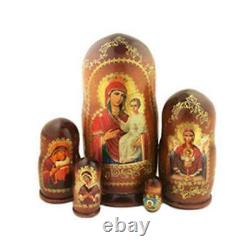 Matryoshka Icon Dolls 5 Nested With Icons of Virgin Mary & Christ 7 Tall. Scenes from the life of Christ, images of Jesus with the Virgin, images of the events recorded in the gospels are depicted as religious icons and are in the hands of millions of people all over the world. As a general rule, icons strictly followed models and formulas hallowed by Byzantine art, led from the capital in Constantinople. As time passed, the Russians widened the vocabulary of types and styles far beyond anything found elsewhere in the Orthodox world. The personal, innovative and creative traditions of Western European religious art were largely lacking in Russia before the 17th century when Russian icon painting became strongly influenced by religious paintings and engravings from both Protestant and Catholic Europe. In the mid-17th-century changes in liturgy and practice instituted by Patriarch Nikon resulted in a split in the Russian Orthodox Church. The traditionalists, the persecuted "Old Ritualists" or "Old Believers", continued the traditional stylization of icons, while the State Church modified its practice. From that time icons began to be painted not only in the traditional stylized and non-realistic mode, but also in a mixture of Russian stylization and Western European realism, and in a Western European manner very much like that of Catholic religious art of the time. These types of icons, while finding in Russian Orthodox churches, are also sometimes found in various sui juris rites of the Catholic Church. Icons considered miraculous were said to appear.

" The "appearance of an icon is its supposedly miraculous discovery. "A true icon is one that has'appeared', a gift from above, one opening the way to the Prototype and able to perform miracles". Gold ornamentaion around Icon may vary - it is hand made.

Domestic orders include tracking info. In cases of a factory defect, we will replace the product at our cost. The item(s) and packaging must be in new, unused and undamaged condition. World Faith is an online store offering a variety of religious merchandise at great prices. Our products are 100% new unless otherwise noted. We work with the biggest suppliers of high-quality merchandise to bring you the highest quality items.

We know that it is important for you to receive exactly what you've ordered and fast! As you can tell from our feedback history, close to 100% of our customers are very satisfied shopping with us but In a rare case if something does go wrong, please contact first us so that we can make things right! We guarantee you only the best experience when shopping with us!

We usually respond within 24 hours on weekdays. Listing and template services provided by inkFrog. The item "Matryoshka Icon Dolls 5 Nested With Icons of Virgin Mary & Christ 7 Tall" is in sale since Thursday, December 19, 2019.

This item is in the category "Collectibles\Cultures & Ethnicities\Russian". The seller is "world-faith" and is located in Fair Lawn, New Jersey. This item can be shipped worldwide.