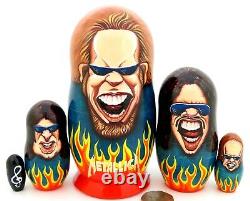 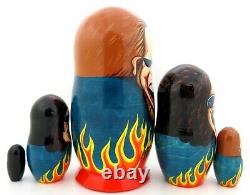 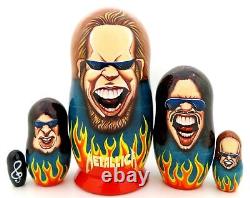 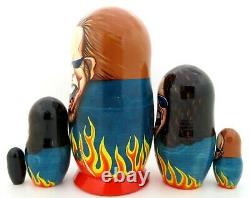 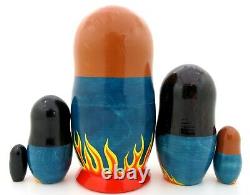 Russian, hand carved and painted. Wooden set of 5 nesting dolls created by the Russian Artist. The height of the biggest doll is 15.8 cm (6 1/4 inches).

Please note: Shop Dolls listings might vary slightly from the photo as they are each hand painted. The Dolls are painted with METALLICA members. Metallica is an American heavy metal band.

The band was formed in 1981 in Los Angeles, California by drummer Lars Ulrich and vocalist/guitarist James Hetfield, and has been based in San Francisco, California for most of its career. The group's fast tempos, instrumentals and aggressive musicianship made them one of the founding "big four" bands of thrash metal, alongside Megadeth, Anthrax and Slayer. Metallica's current lineup comprises founding members Hetfield and Ulrich, longtime lead guitarist Kirk Hammett and bassist Robert Trujillo. Guitarist Dave Mustaine (who went on to form Megadeth) and bassists Ron McGovney, Cliff Burton and Jason Newsted are former members of the band. Metallica earned a growing fan base in the underground music community and won critical acclaim with its first five albums. Metallica was the subject of the acclaimed 2004 documentary film Some Kind of Monster, which documented the troubled production of the band's eighth album, St. Anger (2003), and the internal struggles within the band at the time. In 2009, Metallica was inducted into the Rock and Roll Hall of Fame. The band wrote the screenplay for and starred in the 2013 IMAX concert film Metallica: Through the Never, in which the band performed live against a fictional thriller storyline.

Metallica has released ten studio albums, four live albums, a cover album, five extended plays, 37 singles and 39 music videos. The band has won nine Grammy Awards from 23 nominations, and its last six studio albums (beginning with Metallica) have consecutively debuted at number one on the Billboard 200. Metallica has been listed as one of the greatest artists of all time by magazines such as Rolling Stone, which ranked them at no. 61 on its 100 Greatest Artists of All Time list.