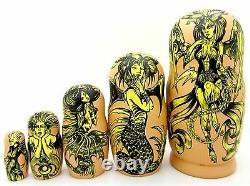 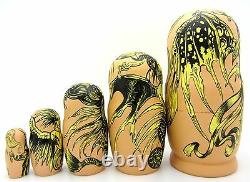 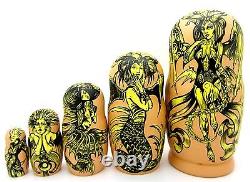 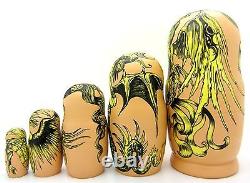 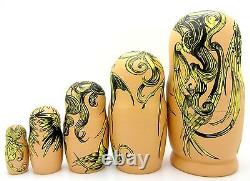 This is a beautiful and unique set of 5 Russian " Fantastic Fairy Magical Mythical Creatures ". Nesting dolls painted and signed by The Russian Artist Maria ROZE. Height of the biggest doll is 18 cm (7 1/8 inches). Mermaids are one of the earliest legendary creatures to be have been talked and written about. Mermen also make a very early appearance, but the female version makes a more powerful and dominant presence in many cultures.

These beautiful enchanting aquatic creatures were often regarded as semi-divine with the aspects of a Goddess. They were often honored in seaside temples as they represented the beginning of life, as was the sea from which they came. They weren't always described as having the torso and tail of a fish, but this does seem to be a very popular portrayal of this magical mythological being. Can you believe that even Christopher Columbus reported seeing three of these aquatic creatures during his first voyage to the Americas in 1493? These enticing beings were known to lure lonely sailors by overcoming them with lust and then dragging them down to their underwater kingdoms.

These beautiful female water creatures were said to either accidentally drown their victims by overlooking the fact that humans could not breathe under water, or drowning them on purpose out of pure spite. They were also known to cause horrible storms that would be the cause of terrible shipwrecks and the demise of many sailors. Also faery, faerie, fay, fae; euphemistically wee folk, good folk, people of peace, fair folk, etc. Is a type of mythical being or legendary creature, a form of spirit, often described as metaphysical, supernatural or preternatural. Fairies resemble various beings of other mythologies, though even folklore that uses the term Fairy offers many definitions.

Sometimes the term describes any magical creature, including goblins or gnomes: at other times, the term only describes a specific type of more ethereal creatureFairies are generally described as human in appearance and having magical powers. Their origins are less clear in the folklore, being variously dead, or some form of demon, or a species completely independent of humans or angels.

Folklorists have suggested that their actual origin lies in a conquered race living in hiding, or in religious beliefs that lost currency with the advent of Christianity. These explanations are not necessarily incompatible, and they may be traceable to multiple sources. Many folktales are told of fairies, and they appear as characters in stories from medieval tales of chivalry, to Victorian Fairy tales, and up to the present day in modern literature. The Reverend Robert Kirk, Minister of the Parish of Aberfoyle, Stirling, Scotland, wrote in 1691: These Siths or Fairies they call Sleagh Maith or the Good People...

Are said to be of middle nature between Man and Angel, as were Daemons thought to be of old; of intelligent fluidous Spirits, and light changeable bodies (lyke those called Astral) somewhat of the nature of a condensed cloud, and best seen in twilight. These bodies be so pliable through the sublety of Spirits that agitate them, that they can make them appear or disappear at pleasure - from The Secret Commonwealth of Elves, Fauns and Fairies.

Although in modern culture they are often depicted as young, sometimes winged, humanoids of small stature, they originally were depicted much differently: tall, radiant, angelic beings or short, wizened trolls being some of the commonly mentioned. Diminutive fairies of one kind or another have been recorded for centuries, but occur alongside the human-sized beings; these have been depicted as ranging in size from very tiny up to the size of a human child.

Even with these small fairies, however, their small size may be magically assumed rather than constant. Wings, while common in Victorian and later artwork of fairies, are very rare in the folklore; even very small fairies flew with magic, sometimes flying on ragwort stems or the backs of birds.

Nowadays, fairies are often depicted with ordinary insect wings or butterfly wings. Various animals have also been described as fairies. Though they can confuse one with their words, fairies cannot lie.

They hate being told'thank you', as they see it as a sign as one forgetting the good deed done, and want something that'll guarantee remembrance. You will be 100% delighted.

Or better yet Be sure to add me to your. And see more unique and interesting things pop up. We speak French, English, German and Russian. Please leave feedback once you have received the item so that i know it has arrived safely.