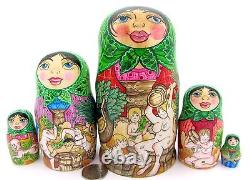 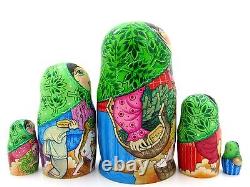 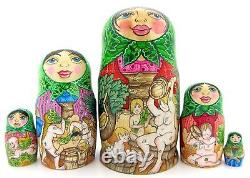 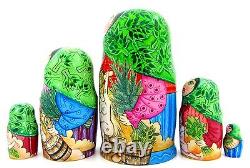 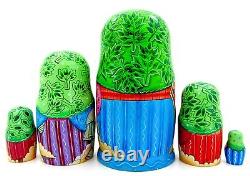 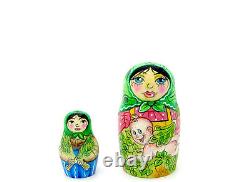 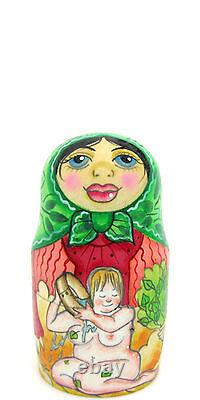 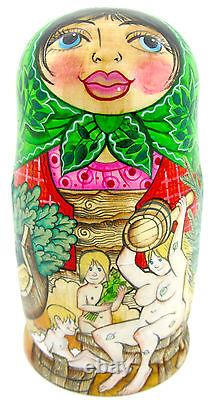 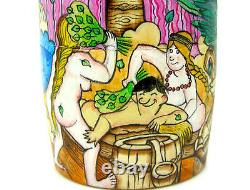 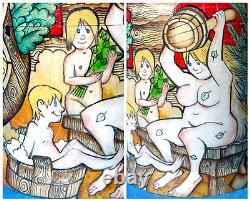 Russian, hand carved and painted wooden set of 5 nesting dolls created by the Russian Artist Obichova. The height of the biggest doll is 15.5 cm (6 1/8 inches). The Dolls are painted as a family having a Sauna.

In Russian can refer to any kind of steam bath, but usually to the Russian type of sauna. In Bulgarian, banya usually refers to a bath and bathing. In Serbian, banja is used exclusively for a mineral water spa, as, for example, in spa resort names such as Vrnjack Banja and Sokobanja.

The earliest description of the banya comes from the Russian Primary Chronicle of 1113. According to the Chronicle, or as it was called by its authors, The Tale of Bygone Years, the Apostle Andrew visited the territories that were later to become Russia during his visit to the Greek colonies on the Black Sea. The belief was held that Andrew crossed through Russia from the mouth of the Dnieper River, passed the hills on which Kiev would later be founded, and went as far north as the ancient city of Novgorod.

"Wondrous to relate, " said he, I saw the land of the Slavs, and while I was among them, I noticed their wooden bathhouses. They warm them to extreme heat, then undress, and after anointing themselves with tallow, they take young reeds and lash their bodies. They actually lash themselves so violently that they barely escape alive. Then they drench themselves with cold water, and thus are revived.

They think nothing of doing this every day, and actually inflict such voluntary torture on themselves. They make of the act not a mere washing but a veritable torment. Another mention of the banya is found in the same Chronicle in the story of Princess Olga's revenge for the murder of her husband, Prince Igor, by the Slavic tribe of Drevlians in 945 AD. The leader of the Drevlians had hopes of marrying the widow Olga and sent messengers to discuss the idea.

When the Drevlians arrived, Olga commanded that a bath should be made ready for them and said,'Wash yourselves and come to me. The bath-house was heated and the unsuspecting Drevlians entered and began to wash themselves. [Olga's] men closed the bath-house behind them and Olga gave orders to set it on fire from the doors, so that the Drevlians were all burned to death.

This set is painted in lovely bright colours. It is finished in Gloss Varnish. A must have for Russian lovers and it would make an amazing and unique gift for any Occasion or a Very Special Birthday, too good to miss!! All my dolls fit inside one another!!

We speak French, English, German and Russian. Please leave feedback once you have received the item so that I know it has arrived safely. I will leave feedback in return. Smoke & Pet Free Item. The leader of the Drevlians had hopes of ma.

This item is in the category "Dolls & Bears\Dolls, Clothing & Accessories\Dolls & Doll Playsets". The seller is "tom3burma" and is located in this country: GB.