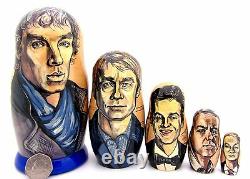 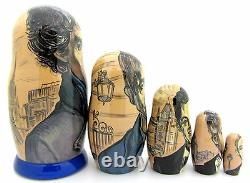 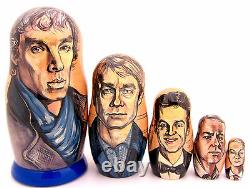 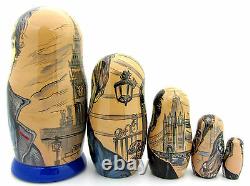 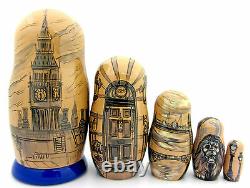 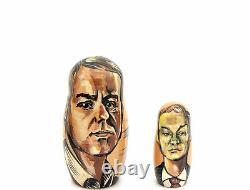 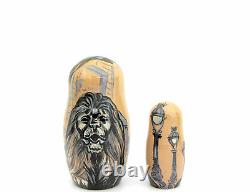 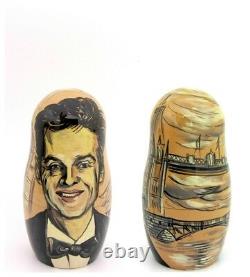 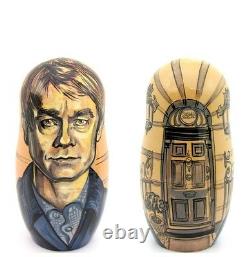 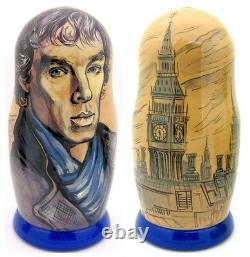 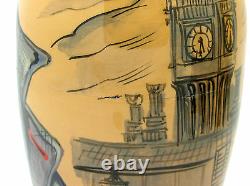 This is a beautiful and unique set of 5. Nesting dolls painted and signed by The Russian Artist Maria ROZE. Height of the biggest doll is 17.8 cm or 7 inches. All my dolls fit inside one another!!

Back in July 2010, the world was a subtly different place. Martin Freeman was the nice one from The Office. Benedict Cumberbatch was actress Wanda Venthams son. Sherlock Holmes was a Victorian. Mark Gatiss and Steven Moffat were two writer-producers looking at the inauspicious summer launch-date given to their unconventional new crime series, and wondering if it would prove as detrimental as an 800ft fall from an Austrian waterfall.

The signs from their employers were not immediately reassuring. BBC drama commissioners had viewed the first three episodes, but, paralysed by Lestrade-like obtuseness, were refusing to commit to more until the ratings came in. The viewing public, though, did not consider this a three-pipe problem.

Over seven million people tuned in to see Cumberbatch and Freeman solving their first case a 21st-century riff on Sir Arthur Conan Doyles A Study in Scarlet. Three years on, Sherlock is a phenomenon.

Its leads have big international careers. The agreeably Hobbity face of Freeman can be seen on the side of passing buses.

Cumberbatch has played a Star Trek nemesis. Sales of Doyles stories have lurched upwards by 180 per cent. Go anywhere with Gatiss, and a fan will offer him a deftly knitted simulacrum of Freeman, or a copy of The Sign of Four translated into Uzbek, or an elaborate theory about how Sherlock escaped the cliffhanger ending of the finale to the previous series, The Reichenbach Fall. I never thought it would be like this, he says. There are only so many ways you can fall off a building. Only a few days remain before the the new series is premiered at 9pm on New Years Day and the nation knows what hes known all along: Im very glad everyone is finally seeing it. Its been like living with a terrible burden. If Conan Doyles detective were called in to examine the artefact that Sherlock has become; to read it like one of those mystery objects from the stories a battered fob-watch or a felt hat smeared with lime-cream what other clues would he find to the extraordinary nature of its success? From his files, hed pull out a newspaper report about the potter whod made a fortune because a teapot of her design was chosen as the preferred kitchenware of Una Stubbss Mrs Hudson; an online story about the Chinese inventing a whole subgenre of online pornographic writing about Benedict Cumberbatch; a tweet from Sue Vertue, Sherlocks lead producer, sharing her suspicions about Elementary, a copycat series created by a US network. Then hed hack into the BBC online previews website and find his access to the Series Three opener The Empty Hearse - prefaced by a list of caveats and warnings longer than the Musgrave Ritual. In turning over the Series One box-set in his hands, however, Holmes would certainly note the speed of Moriartys arrival and conclude from this, perhaps, that the programme-makers were unsure of how long they would have before their toys were taken away from them In the person of Andrew Scott, Moriarty has played no small part in the shows success.

But to truly understand why Sherlock has been so popular, one has to go back to the very beginning. To Sherlock Holmes, the world is a puzzle waiting to be solved; a mass of data from which the truth however improbable can always be isolated.

The roots of this approach lie in the work of Dr Joseph Bell, the Edinburgh University surgeon who taught his students how to read the human body to use a callus or a tattoo to yield the biography of a living patient or a cadaver on the slab. Bells student, Arthur Conan Doyle, knew his methods, made a gift of them to his detective-hero and practised them himself in the surgery, and at the spirit-rapping table. If empirical reasoning could detect a murderer, why not the presence of a wandering soul? Adaptors of Holmes have rarely tampered with this facility. The Seven Percent Solution, the 1976 film that depicts Holmes as a drug fiend and Professor Moriarty as the innocent victim of his delusions, is a lonely exception. The greatest Holmes of the silent screen, Eille Norwood, shaved his temples to make himself look more cerebral, and found himself in demand as a cryptic crossword-setter and the paid advocate of Phosferine, a tonic that claimed to combat neuritis and nervous debility. When Universal brought Holmes back to the screen in the 1940s, they prefaced the first few films with a title-card explaining that the detective was now working on the problems of the present day which were not forced marriages or suburban poisonings, but Nazism and Fascism. Basil Rathbone cracked totalitarianism case by case, exposing Haw-Haws and fifth columnists in a wartime England confected on a Hollywood sound stage.

Guy Liddell of MI5 took great exception to the idea that in comparison to Holmes, British spies were as flat-footed as Scotland Yard detectives. Gatiss has enormous respect for Holmess ability to understand the worlds complexity. I believe very strongly, he says, that one of the reasons why Sherlock Holmes and Dr Watson have survived so long is not just because of their immutable friendship, its because Sherlock as a character brings order to chaos. Thats the consolation he provides. And Gatiss sees similar qualities in the role he has assigned himself in the drama Sherlocks brother Mycroft, the fastidious state spymaster.

Hes the British government version of the same idea. You suspect that theres only stupidity and incompetence, but wouldnt it be nice to know that there was someone like that there? Never has this sense that Holmes is a master of data been more brilliantly portrayed than in Sherlock. I had the good luck to be on the set of the very first episode to see Benedict Cumberbatch perform one of his set-piece deductions: the figurative unpacking of a pink suitcase that has the story of a murder inscribed upon it.

Una Stubbs and I crouched in the doorway of the Baker Street set, mesmerised, and quite unable to take a bite from the jam doughnuts wed taken from the tea trolley. Cumberbatch was lying on his back like a customer in an opium den, with the camera gazing into those strange black eyes of his, and unwinding a long skein of words with arresting speed and clarity. If you saw A Study in Pink, youll recall the scene. Its faintly occult quality was palpable on the studio floor. One of the keenest pleasures of Sherlock is the graphic language it has developed to illustrate the deductive process.

Theres a cracking example in The Empty Hearse, during a scene in which Sherlock encounters a new and significant female addition to the cast. As he looks her over, his gaze releases a cloud of words into the frame: Only Child. Older screen Holmeses went into a brown study; Cumberbatchs version searches through a huge internal database for the idea that, however improbable, must be the truth.

And its impossible to watch him drawing information from the atmosphere like this without thinking of our preoccupation with the collection and analysis of data particularly as the series offers a deeply ambivalent view of the secret state. Little wonder that Cumberbatch was cast in a biopic of Julian Assange. This series of Sherlock was safely scripted before Edward Snowden appeared on the worlds front pages, but the comparison between the whistleblower and the detective both the carriers of vast palaces of secrets hasnt escaped Gatiss.

I havent done it yet. But thatd be very interesting. Thats a story about people working with huge amounts of data, in which the role of the amateur has been called into question. Anyone spinning stories about a figure who gathers great swathes of information, keeps people under surveillance and declares that plots and conspiracies are always revealed by events that are seemingly insignificant might find it hard to insulate their work from current debates about freedom, privacy and secrecy. After all, the hero of Sherlock is both a spy and a dissident.

And when these adventures are as old as Basil Rathbones, we might find ourselves seeing in them the fears and fantasies of the present day, as legible as clues at a crime-scene. Millions watch the series because its witty, smart, moving and clever.

But were also watching Sherlock because it is a product of the age in which we live and seems to know its secrets, too. Please leave feedback once you have received the item so that I know it has arrived safely. I will leave feedback in return. Smoke & Pet Free Item.

The item "Nesting Russian Dolls Matryoshka SHERLOCK Holmes Watson Moriarty Cumberbatch 5" is in sale since Saturday, July 24, 2021. This item is in the category "Dolls & Bears\Dolls, Clothing & Accessories\Dolls & Doll Playsets". The seller is "tom3burma" and is located in Norwich. This item can be shipped worldwide.