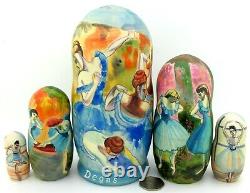 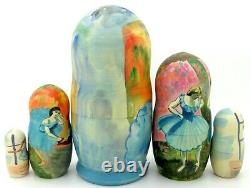 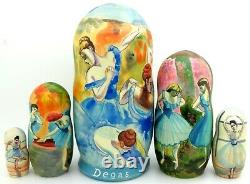 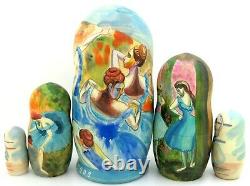 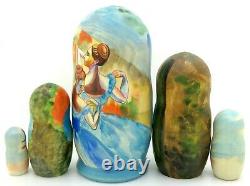 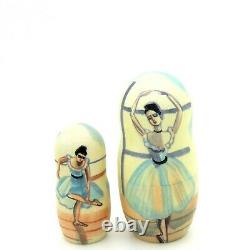 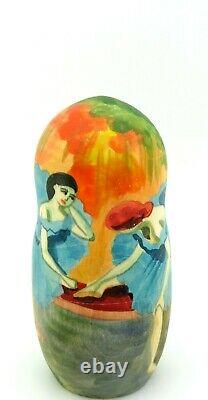 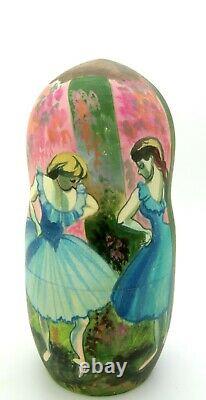 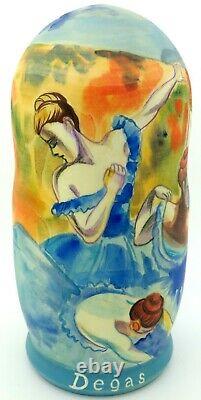 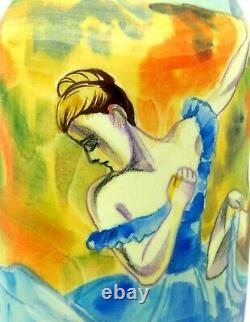 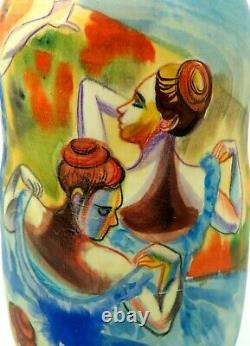 This is a beautiful and unique set of 5 Russian nesting dolls depicting famous paintings by. Made to order by The Russian Artists Petrushina. The height of the biggest doll is 18.7 cm (7 5/16 inches). Edgar Degas born Hilaire-Germain-Edgar De Gas (19 July 1834 - 27 September 1917) was a French artist famous for his paintings, sculptures, prints, and drawings.

He is especially identified with the subject of dance; more than half of his works depict dancers. Regarded as one of the founders of Impressionism, he rejected the term, preferring to be called a realist. He was a superb draftsman, and particularly masterly in depicting movement, as can be seen in his rendition of dancers, racecourse subjects and female nudes.

His portraits are notable for their psychological complexity and for their portrayal of human isolation. At the beginning of his career, Degas wanted to be a history painter, a calling for which he was well prepared by his rigorous academic training and close study of classical art. In his early thirties, he changed course, and by bringing the traditional methods of a history painter to bear on contemporary subject matter, he became a classical painter of modern life. During his life, public reception of Degas's work ranged from admiration to contempt.

As a promising artist in the conventional mode, Degas had a number of paintings accepted in the Salon between 1865 and 1870. These works received praise from Pierre Puvis de Chavannes and the critic Jules-Antoine Castagnary. He soon joined forces with the Impressionists, however, and rejected the rigid rules and judgments of the Salon. Degas's work was controversial, but was generally admired for its draftsmanship. His La Petite Danseuse de Quatorze Ans, or Little Dancer of Fourteen Years, which he displayed at the sixth Impressionist exhibition in 1881, was probably his most controversial piece; some critics decried what they thought its "appalling ugliness" while others saw in it a "blossoming".

In part Degas' originality consisted in disregarding the smooth, full surfaces and contours of classical sculpture... [and] in garnishing his little statue with real hair and clothing made to scale like the accoutrements for a doll. These relatively "real" additions heightened the illusion, but they also posed searching questions, such as what can be referred to as "real" when art is concerned. The suite of pastels depicting nudes that Degas exhibited in the eighth Impressionist Exhibition in 1886 produced the most concentrated body of critical writing on the artist during his lifetime...

The overall reaction was positive and laudatory. Recognized as an important artist in his lifetime, Degas is now considered "one of the founders of Impressionism". Though his work crossed many stylistic boundaries, his involvement with the other major figures of Impressionism and their exhibitions, his dynamic paintings and sketches of everyday life and activities, and his bold color experiments, served to finally tie him to the Impressionist movement as one of its greatest artists. Although Degas had no formal pupils, he greatly influenced several important painters, most notably Jean-Louis Forain, Mary Cassatt, and Walter Sickert;his greatest admirer may have been Henri de Toulouse-Lautrec.

Degas's paintings, pastels, drawings, and sculptures are on prominent display in many museums, and have been the subject of many museum exhibitions and retrospectives. Recent exhibitions include Degas: Drawings and Sketchbooks (The Morgan Library, 2010); Picasso Looks at Degas (Museu Picasso de Barcelona, 2010); Degas and the Nude (Museum of Fine Arts, Boston, 2011); Degas' Method (Ny Carlsberg Glyptotek, 2013); Degas's Little Dancer National Gallery of Art, Washington D.

These sets are truly beautiful works of art, finished all round to the highest standard by one of the very best Artists in Russia. We speak French, English, German and Russian. Please leave feedback once you have received the item so that I know it has arrived safely. I will leave feedback in return. Smoke & Pet Free Item.

Powered by SixBit's eCommerce Solution. This is a beautiful and unique set of 5 Russian nesting dolls depicting famous paintings by EDGAR DEGAS made to order by The Russian Artists Petrushina. His portraits are notable for their psychological complexit. This item is in the category "Dolls & Bears\Dolls, Clothing & Accessories\Dolls & Doll Playsets".