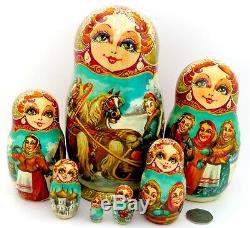 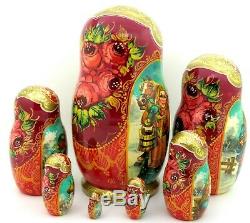 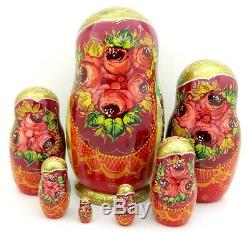 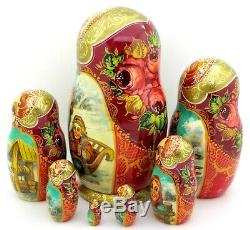 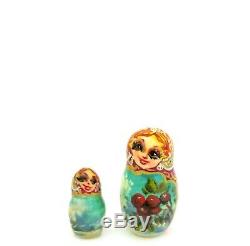 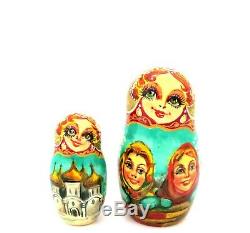 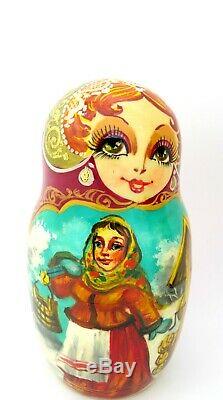 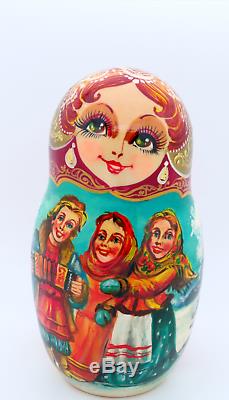 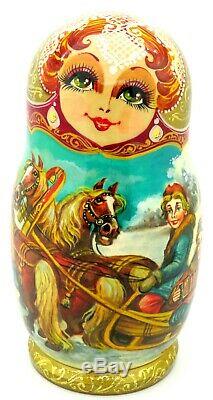 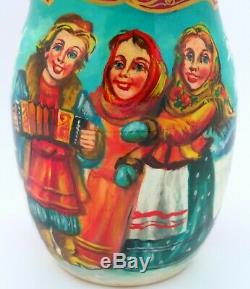 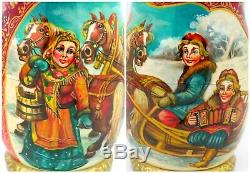 This is a beautiful and unique set of 7 LARGE. Russian nesting dolls painted with Winter Scenes, Traditional Games and Troika Riding and signed by the Russian Artist.

Height of the biggest doll is 20.4 cm (8 inches). Is the traditional Russian carriage drawn by a team of three horses harnessed abreast. The Russian troika is known for its high speed (up to 50 kilometers an hour) and was often compared to a flying bird. The high speed was possible due to the special training and arrangement of the horses at the carriage. The horse in the middle, called the shaft horse, trots and acts like a locomotive, while the tracers - the horses on its sides maintain a brisk gallop.

This method of arranging the horses became popular not only for speed, but also for endurance, good cargo capacity, maneuverability and safety; a three-horse carriage was much more stable than the two-horse carriage widely used in Europe. Driving a troika required special skills. Those wishing to become troika drivers had to be trained from a young age and be physically fit; the arms of the driver sometimes had to endure up to 50 kilograms of weight while trying to maneuver the horses. The special arrangement of horses also allowed the driver to control the load on each horse. At a certain point the driver could lash one side horse so that it would run faster and let the other rest.

The profession of troika coachman was hereditary and prestigious among peasants. Not only the drivers needed special training but the horses did too. The Orlov Trotter, the most famous breed of horse developed in Russia, was considered to be the best troika horse because of its long stride, speedy trot, stamina, and at the same time, beauty and elegance. The breed was named after its developer, Aleksey Orlov, and usually only very rich people could afford the animals.

Sound signals were developed to let the personnel at the next postal station know when the troika was approaching, so that they could prepare fresh trotter horses. Peter the First tried to implement the European practice of using horns, however the coachmen preferred to send out a deafening whistle. However, this kind of warning was later banned and replaced by shaft-bow bells, which became an integral part of the famous Russia troika. The Valdai bells were particularly famous, producing a clear "singing" sound so that some even compared the Russian troika to a musical instrument.

A troika was usually accompanied by about 100 bells, on the bridle, on the saddle and inside the many harness brushes. The singing of the many bells, some in minor, others in major, combined with the sound of hooves running, created a unique melody, pleasing to the ears.

But troikas were also a joy for the eyes with their richly decorated harnesses and bows adorned with painting and fretwork. With the development of railways, the troika was no longer used in postal services.

It was still used during special festivities, such as weddings and also became a sport. Competitions were extremely popular in Russia in the middle of the 19th century, especially during winter.

The first competitions were held at the Moscow hippodrome in the 1840s. In 1911 the Russian Troika was showcased in the World Exhibition in London. However in the 1990s the interest in troikas declined to a point that even the existence of such a carriage was under threat of disappearance.

Thanks to a group of enthusiasts led by Alla Polzunova, the greatest female troika racer during the Soviet era, the sport didn't die and is now making a comeback. Troika competitions have been initiated in such cities as Yaroslavl, Kostrom, Vologda and Moscow. Competitions have also been organized in France, at the event Russian Days in France.

We speak French, English, German and Russian. Please leave feedback once you have received the item so that I know it has arrived safely. I will leave feedback in return. Powered by SixBit's eCommerce Solution. The item "Troika Matryoshka Winter Walks Big Babushka Russian 7 HAND PAINTED nesting dolls" is in sale since Wednesday, July 15, 2020.